I am a simple man, and I believe that often the right choices in life can be the simplest to make. When in question, do what is right. As our nation faces very difficult and challenging times during this election season, I think moving through them requires simply looking back at our core foundation. Why did the men and women of the American revolution want liberty in the first place? What role did their faith play in their lives? Have we forgotten the price for fighting injustice and how precious it’s reward is? Has our enjoyment of freedom for so long totally warped the framing of freedom’s entitlement?

“Not too long ago, two friends of mine were talking to a Cuban refugee, a businessman who had escaped from Castro, and in the midst of his story one of my friends turned to the other and said, “We don’t know how lucky we are.” And the Cuban stopped and said, “How lucky you are? I had someplace to escape to.” And in that sentence he told us the entire story. If we lose freedom here, there’s no place to escape to. This is the last stand on earth. And this idea that government is beholden to the people, that it has no other source of power except the sovereign people, is still the newest and the most unique idea in all the long history of man’s relation to man.

This is the issue of this election: Whether we believe in our capacity for self-government or whether we abandon the American revolution and confess that a little intellectual elite in a far-distant capitol can plan our lives for us better than we can plan them ourselves.

You and I are told increasingly we have to choose between a left or right. Well I’d like to suggest there is no such thing as a left or right. There’s only an up or down—[up] man’s old—old-aged dream, the ultimate in individual freedom consistent with law and order, or down to the ant heap of totalitarianism. And regardless of their sincerity, their humanitarian motives, those who would trade our freedom for security have embarked on this downward course.

In this vote-harvesting time, they use terms like the “Great Society,” or as we were told a few days ago by the President, we must accept a greater government activity in the affairs of the people. But they’ve been a little more explicit in the past and among themselves; and all of the things I now will quote have appeared in print. These are not Republican accusations. For example, they have voices that say, “The cold war will end through our acceptance of a not undemocratic socialism.” Another voice says, “The profit motive has become outmoded. It must be replaced by the incentives of the welfare state.” Or, “Our traditional system of individual freedom is incapable of solving the complex problems of the 20th century.” Senator Fullbright has said at Stanford University that the Constitution is outmoded. He referred to the President as “our moral teacher and our leader,” and he says he is “hobbled in his task by the restrictions of power imposed on him by this antiquated document.” He must “be freed,” so that he “can do for us” what he knows “is best.” And Senator Clark of Pennsylvania, another articulate spokesman, defines liberalism as “meeting the material needs of the masses through the full power of centralized government.”

Well, I, for one, resent it when a representative of the people refers to you and me, the free men and women of this country, as “the masses.” This is a term we haven’t applied to ourselves in America. But beyond that, “the full power of centralized government”—this was the very thing the Founding Fathers sought to minimize. They knew that governments don’t control things. A government can’t control the economy without controlling people. And they know when a government sets out to do that, it must use force and coercion to achieve its purpose. They also knew, those Founding Fathers, that outside of its legitimate functions, government does nothing as well or as economically as the private sector of the economy.”

The preceding was an excerpt from Ronald Reagan’s speech, A Time for Choosing, given on October 27, 1964. 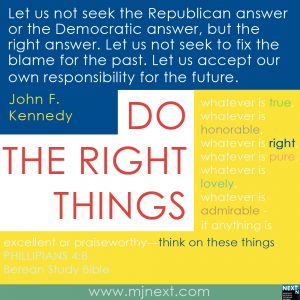 Put God first. Don’t rely on the government or anyone else to make decisions for my personal life – a mature, responsible adult should be capable of choosing what’s best for their home and family. Rely on family, friends and neighbors first, then the government to help support areas where others or myself are not capable. The government should be secondary to these things with elected officials acting as our representatives.

“Let us not seek the Republican answer or the Democratic answer, but the right answer. Let us not seek to fix the blame for the past. Let us accept our own responsibility for the future.” John F. Kennedy

WE are first responsible to help care for our families, neighbors, fellow citizens and communities. WE must accept the responsibility for the future. The day-to-day responsibilities in every area of our lives.

Winston Churchill said, “The destiny of man is not measured by material computations. When great forces are on the move in the world, we learn we’re spirits—not animals.” And he said, “There’s something going on in time and space, and beyond time and space, which, whether we like it or not, spells duty.”

We have a duty to do the right things while we still have the freedom to choose.  Many have already sacrificed for it. We are blessed and lucky to have it.