Is indecision bugging you? Should you join Pokemon Go? I was pulled into the fray after hearing the social media buzz and “Pokemon” hunters began showing up at our workplace. I wasn’t really into the game as a young adult, but I knew about the game and it’s following.

WHAT IS POKEMON?
Pokemon are fictional creatures that humans known as Pokémon Trainers catch and train to battle each other for sport. The Nintendo game was very popular in the 1990s.

WHAT IS POKEMON GO?
With the launch of a mobile app, Pokemon Go, recently there’s been a surge of Pokemon popularity. Pokémon Go uses your phone’s GPS and clock to detect where and when you are in the game and make Pokémon “appear” around you (on your phone screen) so you can go and catch them. Pokemon fans love this concept since it places the game in their “real” world – thus the augmented reality.

The app is free: Android I iOS 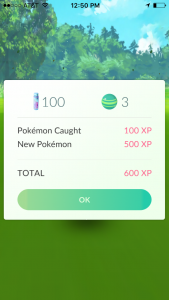 COMBAT POWER (CB)
Instead of being ranked by levels, Pokemon are ranked by their Combat Power. Common Pokemon and unevolved Pokemon will have a lower CP. Evolved and rare Pokemon typically have higher CP. Your Pokemon can raise their CP by powering up through Stardust and Candy, two items that can be obtained by a variety of methods, such as catching Pokemon.

TEAMS
Work your way up to Level 5 in order to join a team.

GYMS
Pokemon Gyms are claimed by a team and, based on the Gym’s Prestige level, a number of trainers can assign their Pokemon to protect the Gym. One of those trainers is the Gym leader. The Gym leader’s level is marked by a crown and has the highest level Combat Power (CP) Pokemon at the Gym.

SETTINGS
Want to turn off background music, adjust power settings, etc…? Tap the Pokeball icon on the screen, then look in the upper right-hand corner.

POKEPROFITS
The app is free, however the developers are offering in-app purchases to generate revenue. Localized ads and selling user data are a couple of ways I could seem more profits for it. Some Pokemn Go locations sell goods and services which make hunters prospect consumers. And for the lazy hunters, Uber could take a stake! 🙂

What other ways do you see this app further monetizing?