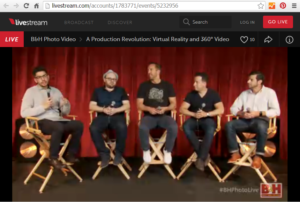 What is virtual reality (VR)? “…the creation and stimulation of environments that you can interact with and experience. Virtual reality is simply the next way that we are going to tell stories. Take it a whole step beyond film and photos and traditional story telling methods.” Nicolas Cambata

Filming
Be mindful of framing; watch for objects which may interfere with the immersive experience (foreground).
Treat the camera(s) like a person and think about the human reaction

Post-Production
“Painting out” in frames is possible.
Stitching is necessary to “stitch” overlapping fields of view. It turns the individual videos into a single, high resolution, seemless panoramic video. Click here to check out VideoStitch tutorial.
Parallax will need to be corrected. Parallax error is introduced by the slightly different points of view of each camera. To have a perfect stitch, each camera and lenses would have to be at the same position, which is physically impossible.

Future
The “Holodeck” Star Trek experience could become reality with VR and 360 video.
VR and 360 video is an emerging field and the industry for it is now being created.
Gaming industry is already producing and taking advantage of vr and 360 video.
Be on the lookout for immersive social media utilizing vr and 360 video
Retina laser projection
Improvements with hardware and headsets

Brand education is key to success.